Well, I can finally show what I made for my Ravelry exchange. It was "Favorite Animal" and my partner liked Tree Frogs! Well, since I am not experienced enough to knit her one, I thought I would try to crochet her one. I planned on tatting one too, but, I thought a tatted one would be too small, as the price limit and such was higher than most exchanges I have been it. So, I went to crocheting one. Now, I only know how to single crochet. That is all I could ever remember from what my sister tried to teach me. So, I just started crocheting, and oddly enough, with all the 3D tatting I do, it was pretty easy to make this GIANT tree frog! He is about 2ft long, and boy, it was hard to give him up! 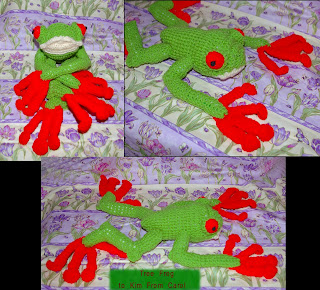 Then, I made this little 3D tatted frog, and put magnets in him, so he could be put on the fridge, or hold her stitch markers, as he is doing in the photo.  I love the big eyes!  I really enjoyed the exchange, and am going to join in more next year! Hope you enjoy the photos! 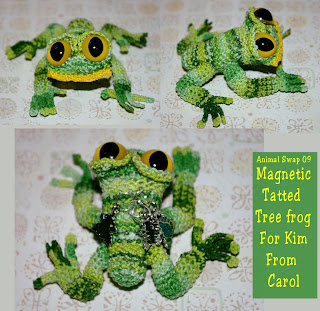 I love the frogs. They are so cute. I also wanted to say thank you for the link for the skull bracelet. I love doing patterns that call for two shuttles. I will tat it and put it on my blog as soon as I can. Tonight, I'm doing scrapbooking with Carol aka Carol's Little Treasures. She just lives right down the road from me plus she is my Tatting Teacher. Thanks Again.

All your frogs are adorable. They must have been so much fun to make. In fact I can hear them croaking!!!!

I LOVE YOUR FROGS CAROL...YOU Can make me one for X=mas....LOL The smaller one that is. He can ride on my Hedgie ( DingBat) LOL

Thanks everyone!Yeah, the two foot frog sort of got away from me, but he was fun to make!
and Sherry, I have already started something for you.. not a frog...but it can probably ride little Dingbat.

Your frogs are just TOO much. You amaze me everytime.

Well, I can see why you had a hard time giving those up. They're sooooooooo cute, & the green & orange tf just shines!

I love the little tatted tree frog. To cute.
Did you make up the pattern?
Good job.
Elizabeth
Mobile, AL.

YEs, Elizabeth, I made him up as I went. I really liked his giant eyes!!