Ok, here is Project X as of today. I have included two views to help with the guesses. I will tell you it is about 7x6x5 or so. I haven't blocked it yet, as that will wait for later. I also haven't hidden all the ends yet either (I am such a lazy tatter!). I still have a ton to do to it, but...anywhoooo... any guesses yet? 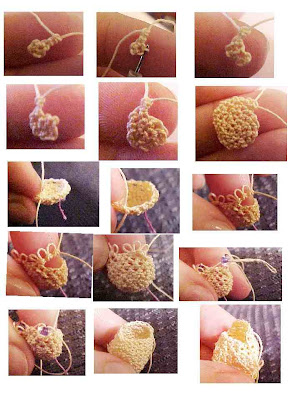 Here are some photos of how I begin the 3D tatting. This was how I did the fairy boy you see in my slideshow. I usually make a ring of 6, then chain 2, then join into the "bridge" of the first double stitch on the right, finish this stitch with the second half of a ds. Chain one, join the next bridge.. etc. You keep doing this, around and around until, for instance for a small head, I get a circle of about 3/4 inch wide. Then I start to taper down, but only joining into the bridges, not adding any chain stitches. This is the way I do all the 3 D tatting, adding and subtracting double stitches as needed to make heads, hands, bodies, whatever. If I need to change thread, I just cut and hide the original thread, and add the new thread onto the next bridge. Clear as mud, huh? This is why I can't really write out a pattern. I am really not trying to keep this technique to myself, as it wasn't even created by me. It was created, as far as I know, by the late Angeline Crichlow. I have told many other tatters how to do it, but so far, I am the only one I know who does it. As it is rather like sculpting with thread, perhaps I should call it Sculptatting... 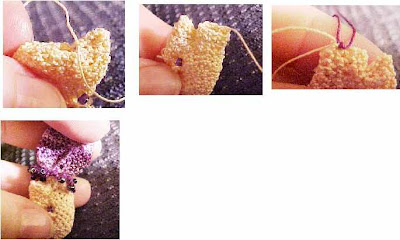 Hi
I thought I would add a slideshow of my 3D tattings to my blog, just for fun. Click on it to start it. If it doesn't move, just click on the right side of the photo, and it will change to the next picture.
It took me a while to figure out how to do it. I saw a badge of pictures on someone else's site, but couldn't figure out how to do that. It wouldn't work for me when I tried it. So, I had to load the photos onto flickr, put them in a "set", then click on slideshow and share to get the "code". I then put the code into the blogger HTML/Javascript gadget. Tada... slideshow.
8 comments: 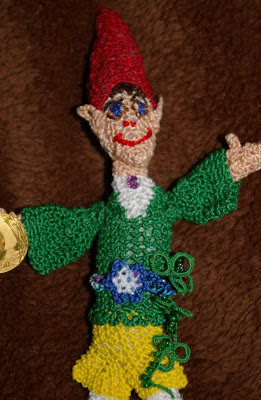 Conor wanted to thank everyone for welcoming him in such a big way. He has had comments from cousins and their Moms, and was really excited to hear from his creator, Pamela! Yes, his stone in his neckerchief is sparkly, but I didn't have an Irish coin (I think that is what his cousins have) so he has a little gold piece I was given as a gift.
He wanted me to make sure everyone knew he was tatted. Some people thought he was just like his cousins, but he is a little different. So, here is a closeup of him, just in case anyone wants to see.
He has been running all over the house making friends. First, he ran into Boudica, at first he was a little scared, but she is friendly, and soon they were playing trampoline on her web. 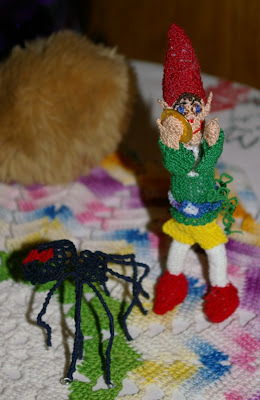 Next, he met Hoggle. He really loved her from the beginning. She even let him move into her house with her. Here he is with her and giving a big thumbs up on top of his new house. 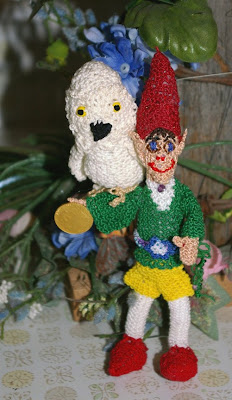 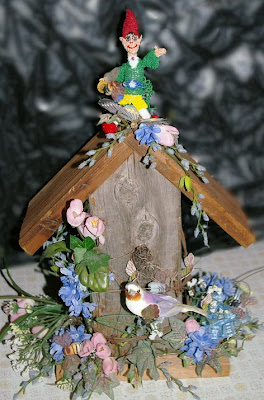 I have been asked about a pattern. I just wouldn't have a clue how to write one out. It is very much like sculpting when I 3D tat like this. I just try to make things come out like they look in my head.
5 comments: 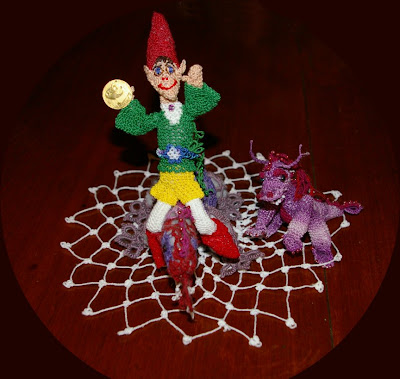 Where to start. Well, I had seen these little leprechauns that were being sent to lucky tatters. They were made by Pamela, and were just so cute! They would just show up out of the blue, and get into all kinds of mischief in their new homes. I wanted one very badly, and so, I tatted myself one. (though the real ones aren't tatted). Though, I only had a few pictures as references, and I don't know what kind of coin the others are holding I tried to make them look like their cousins. I named him Conor, as that means "lover of hounds" and if you know anything about me, you know I love my dog! Conor is getting along great here, first thing he did was make friends with my tatted dragons. Here he is riding my big dragon (pattern by Sherry Townsend), as my little 3d dragon, PD, watches. I hope Pamela doesn't get mad that I copied my tatted one to look like hers, but I thought hers were so cute, and wanted Conor to fit in with his cousins.
Here is a photo of Conor consoling Rebel. He went to the vet today, and got shots and bloodwork (yearly thing) and look at the bruise on his arm! Ouch. 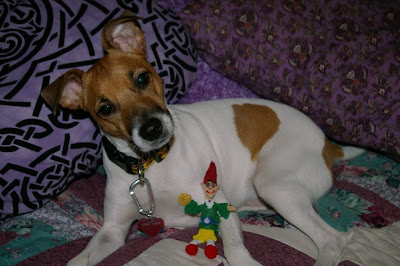 Here is Project X as it is progressing. I haven't blocked it yet, and won't until it is finished. I do try to hide my ends as I go, but I have a couple to do yet. Just so you can see how it is going.
Any guesses yet? and for the one person who probably knows what it is, no hints to anyone! 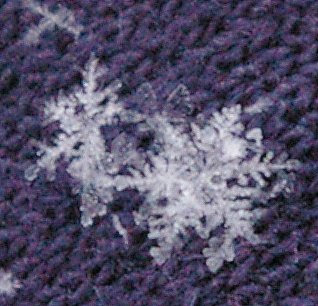 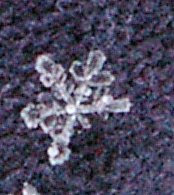 Oh, it is snowing out! I went out and took some pictures, here are a couple of snowflakes someone might use to make a tatted snowflake pattern with! I will be posting an updated picture of project X later tonight...dundunduuuuuuuuuuuun....
1 comment: 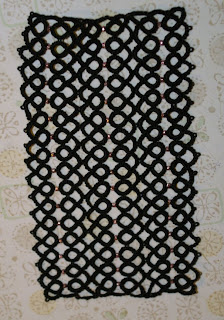 I have started a new project for this new year. I am going to show the progress here, and try to make sure I write down the patterns as I go. I am not going to tell what it is, I will call it Project X when referring to it, to keep everyone guessing. It is a big project, so I will do it along with others I have planned. Here is a picture of the beginnings. Have a guess as to what it will be?

In my Yahoo blog, I mentioned tatting resolutions I made. Such as tatting patterns of others that I have had a long time, and wanted, but never done. I have been doing some, I just finished this lovely doily by Abby, 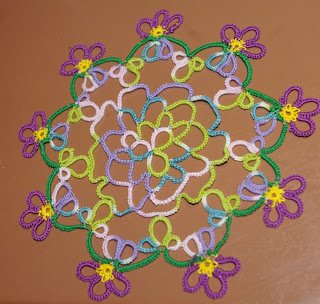 and the Celtic Spider Boudeca by Ruth. Though my Boudeca doesn't stand up too well, I think I made her legs to long or too heavy, I still think she is cool! 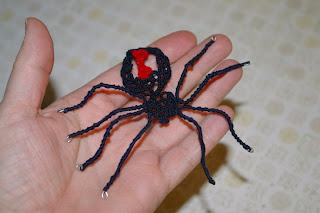 I am not sure what I will tat next, besides Project X, I guess I should start thinking about the fair in July, but I will keep you posted.
5 comments: