Yes, I know she is a little early this week but, I just finished her and she wanted to show off! Here is my little snowgirl. I have named her Snowella.. 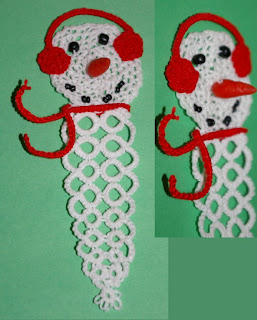 She is basically my Icy snowman/icicle pattern, but with earmuffs and a scarf.(thanks to Abby for the idea!)  I made the carrot nose from Fimo clay. I think she is a cutie pie, and she will look nice on my tree next Christmas.
7 comments: 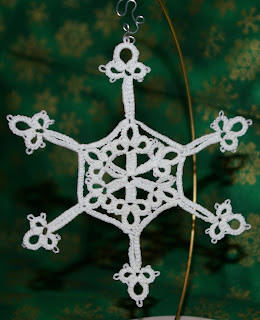 Hello, week four is here... and here is my entry. I call it the Neige Flake. Neige is snow in French, and when I made it, the tips reminded  me of the French fleur de lis.  I like this snowflake, it is so spokey, and a little different.
2 comments:

Well, for anyone who has ever played Facebook's Island Paradise.. you know how hard it is to get a kiwi for your island. I woke up this morning with a tatted kiwi in my mind. Odd thing, I had never thought of tatting one. I immediately got up and scribbled down the picture in my head... and here he is. 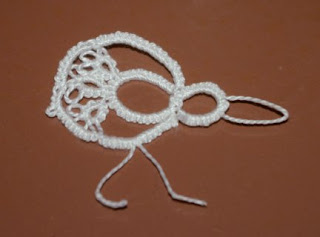 two shuttles CTM. I used DMC 8 and Kiwi is

about 1½ long not counting beak.

Ch 16 join to base of head ring

Cut leg picot and block or stiffen to put in curve for feet, and point beak.
14 comments: 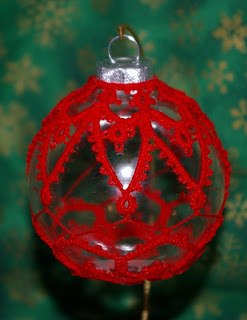 Woo hoo! I got this one finished early. I designed this ball ornament cover, actually it is in two parts then strung together. It is on a 3" clear ball, DMC Christmas(#666, ironically) red, size 8. I will have to write down the pattern, but it is REALLY easy.
I think I will call it..."Picotriffic Christmas Ornament".
(pronounced pico-riffic)

ps... I have just finished the pattern. Anyone care to test tat it? Email me..
pps...here is a photo with beads.. 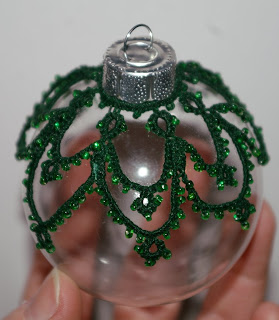 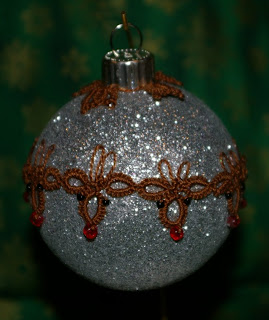 Ok, as promised.. here is week one and week two of my challenge.  First, week one, is a glittery ornament with my pattern "Reindeers in a row" surrounding it. Also, on the top are some doubled rings, which resemble deer tracks.  I love this little pattern. 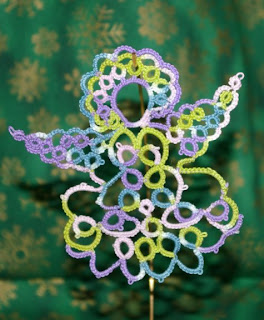 Week two... is Christmas Angel from the Christmas Angels and Other Ornaments book. I really dislike the written out instructions, as I tend to get lost easily, but, she is so pretty. She is done in some of the Lizbeth thread that was a gift to me from Celitcdreamweaver. So, what to make for next week? I don't know yet, but I will post it by the 21st!~
Oh, yes, and take a look at my knitting blog, to the sidebar... doggoneknit... if you wish, to see the goodies I created for the Favorite Author/Novel exchange. My partner, Jenni, likes vampire novels, so I made her some appropriate goodies!!
4 comments:

Ok, so I have been doing a lot of knitting lately. I am really enjoying this new hobby, but, I need to keep up with my tatting, too. So, to this end, I am challenging myself to make one tatted ornament per week until Christmas. If I do this, I should have at least 50 ornaments to adorn my tree by the time I put it up this year. Wouldn't that be nice? Ok, so, this is the 7th of January, and technically the end of week one, but, I will give myself leaway, as I just decided to do this, and say I must do two next week to catch up. After that.. the task master says.. ONE PER WEEK!  Anyone care to join me in my challenge? If not, that is cool, you can watch my blog for my posts and wish me luck with my new challenge!
9 comments:

As many of you know, Tatskool is the creator/Mom of the wonderful little leprechauns that arrive, unsuspectingly, in tatters homes.  I had seen her cuties, and had wanted one for myself, so, I tatted little Conor. (he can be seen in other posts here). I had been a little afraid of showing him, since I had tatted him as exactly as I could after hers, and some people don't like copy cats, even if it is a form of flattery. Well, she welcomed him into her little family of leprechauns with open arms. This made me, and Conor, very happy. So happy, Conor convinced me that I should create a little brother for him, and send him to be with Tatskool.

So... along came Nollaig. 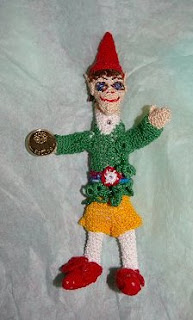 This means Noel, or Christmas, in Irish, which was fitting, as I was going to send him as a secret Christmas present to Tatskool. I sneakily wrote to Erin and Gina, knowing one of them would have her address, as she had been in exchanges on the Tattinggoddess site. They both sent me the address, thanks again ladies!, and I went to addressing the envelope. 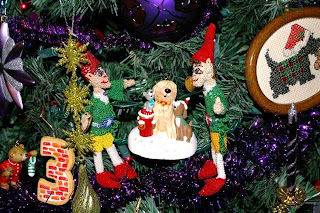 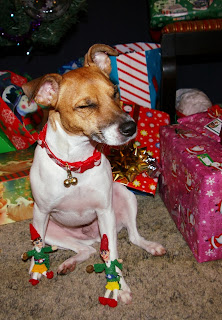 Conor and Nollaig climbed the Christmas tree, and sang with the singing dogs ornament (it barks Jingle Bells). Then, they had a laugh about that with Rebel.  He likes his little leprechaun friends so much, he wanted a little family photo with them before Nollaig left. 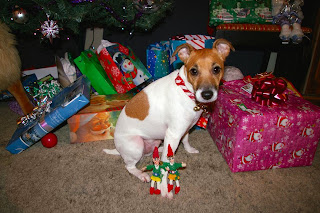 Then, the boys played in the small tree I have on my kitchen table... but alas, the time came when Nollaig was to leave. 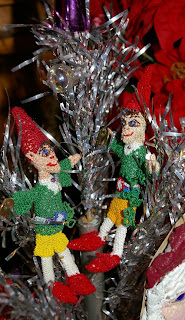 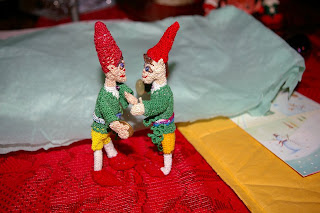 but he finally broke down and had to give him a going away hug! 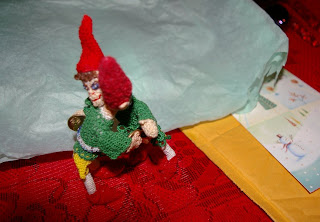 Then Nollaig was away to Ireland to meet his new Mom. I drove him to the post office and kissed him goodbye...

On my return home..what did I find in my mailbox? Hmmm a package from... Ireland! What! This was unbelievable!  I couldn't say anything about Nollaig, as he was to be a surprise, but I did blog about the mystery package I received, and, later revealled to be my very own leprechaun, Rory!

How uncanny is this?  I had mailed Nollaig to Tatskool on the very day I had received Rory from her!!

But, still I couldn't blog about Nollaig... so I waited, and waited for him to arrive in Ireland. And waited...oh, my gosh, it was weeks! I was so afraid he had gotten lost! Every day I checked to see if there was any word from her that he had arrived. And, every day, no news!  Then finally, I got a letter from Tatskool telling me he had arrived at her post office on Dec 14... but she had just gotten him on Jan 4th! WHEW~! what a relief! She told me how much he liked him, which made me ever so glad!  She will post about him later, as she is entertaining family, and I am sure little Nollaig will have a great story to tell about his new home, but I just had to tell the story about little Nollaig's long journey from America to Ireland!

...to all my internet friends!
Christmas is over, and it was great. I had lots of fun with family and friends.  Now, the new year has come and gone, and yes, we had corn, beef, cabbage and black eyed peas! Somehow, it was the best I had ever cooked! I spent the day doing things I liked, because, as the 'tale' goes, what you do on New Year's day, you will be able to do the rest of the year. Tatting, knitting, playing with Rebel, were the things I had to make sure I did! No laundry or cleaning. (well, not much anyway!)
I am in some exchanges on Ravelry, and I was doing some knitting for that. I did get one thing finished, and I hope it will fit my spoilee. It turned out pretty nice, but I can't show it until Feb. or so.
I am in the favorite book/author exchange, and have just signed up for the favorite holiday (of course, I chose Halloween!) and the Alice in Wonderland exchange. Each one ends at the end of two months, so I will have one for the first 3 months of this year.  I just love exchanges, and I get so involved as to what to make my spoilee, I usually forget that I will get something in return!  I am getting better doing my knitting, as I am actually giving some as a gift to my spoilee this time! I also have started my
Bat Shawl , and so far, I have the bottom diamond point finished. This isn't very far at all, but, it doesn't have any mistakes yet, and that is a big accomplishment for me!
I have not made any resolutions, as I  know me, and I won't keep them anyway. I will try to post more to my blogs, this one and the knitting one, though. I only have 3 followers on the knitting blog, but here's hoping for more in the new year!
And here's hoping you all have a great new year!!!
1 comment: