I went to get my entries yesterday. I love reading the comments the judges have. I wish some were more constructive, but maybe that's just me.
Here is the little display I made to put up for a while. I also learned I got 5 people's choice votes for my photos.. that's pretty good. There were around 150 entries altogether, I was told. Though I only got a 2nd and third ribbon, and the picture that got the people's choice..didn't even win a ribbon. hmmm 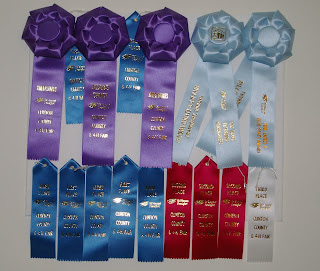 I have returned triumphant!  I am so happy with the prizes I won.. let's see now, starting from the largest prizes ... we have...

Cowboy who Rides and Ostrich Ornament (tatted)
He won the Sweepstakes, Judge's Choice and a blue ribbon! Wow! 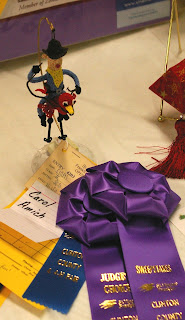 Doctor Who mittens... Sweepstakes and Blue 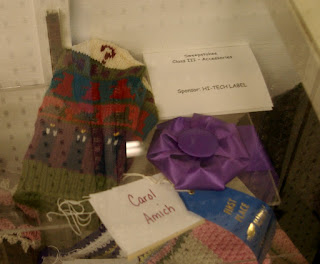 Special awards... Grand prize IEHA card. (Indiana Extension Homemakers Assoc. for their 100th year anniversary)
I knitted their logo, and a message, and attached it to a card. (I made the chart myself). 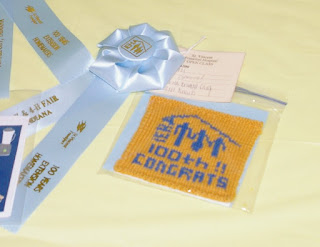 Pink Ladies New Baby card. A special thanks to Jane Eborall for the
stork pattern. I added a cap and bow tie to him. 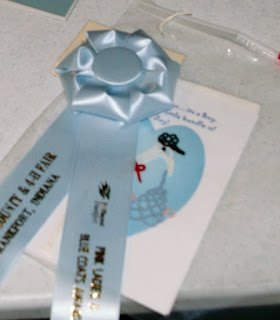 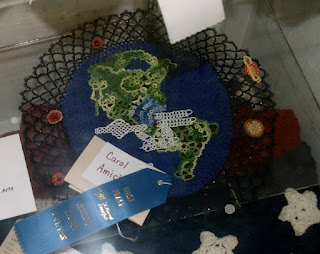 Tatted Spider on Web.
(You can see here that the clown and the jelly gun didn't win. And you
can see what did win instead of them.) 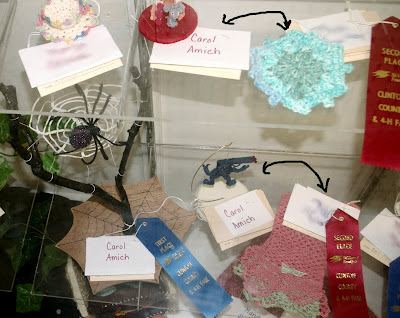 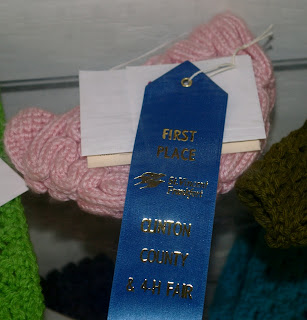 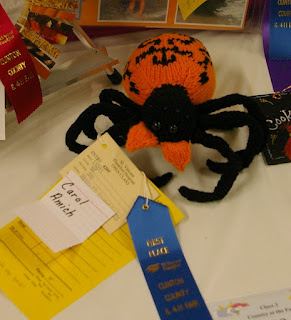 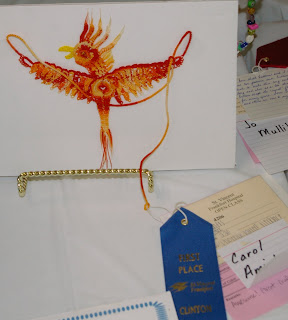 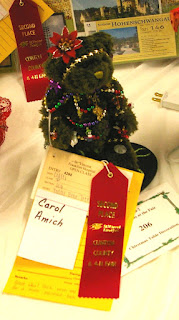 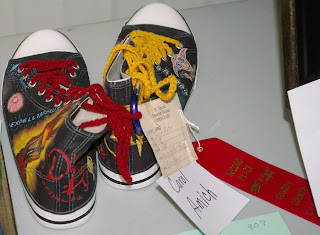 and a Photo of a Wild Flower 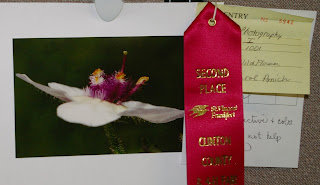 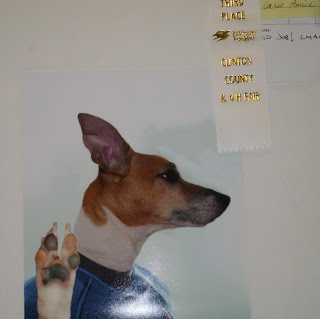 The non-winners included the Misfit Clown and mouse, and the Gun that Shoots Jelly, and two other photos. I also entered
the Hogwarts Express shawl, (knitted) and it took me more than half an hour to find it.... because it was underneath another entry! So, I don't know if it was even judged, let alone if I won anything.
As you can see.. I had a great day at the Fair!!!

No photos to show...yet. Don't want to influence any judges that may see my blog somehow. heeheeI took all of my entries to the Fair last night. 18 in all! Wow. I think that is the most I have ever entered. I had my entry papers already filled out, so all that needed to be done were the tags. Whew. It is such a time saver to have those papers filled out. I entered all 7 of my Knit and Crochets in the time it took another lady to enter 1 of her items! Only took me 22 minutes in all.
There were 7 entries in Knit and Crochet, which includes tatting,
Crafts...6 (in which I also entered tatting)
Fine Arts...1
Photography 4
I will post again on Sunday. That is when the results come out. Wish me luck!
No comments: