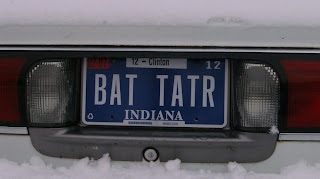 Or, rather, there I went! Here is my new license plate! I am excited! (it doesn't take much!). I have wanted a personalized plate for a long time, and I finally decided to get myself one for an early birthday gift. They wouldn't let me get the whole name, and I had to leave a space... so this is what I came up with.
Now the world can see.... there goes battatter!
8 comments:

Now you have a face... now go find me a name! Little brother has arrived. Here you see him alone on his little branch.. 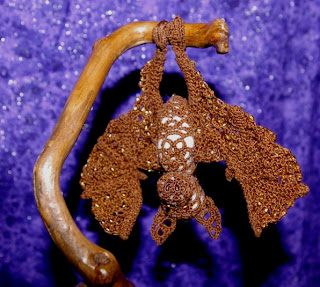 but don't realize how small he is until you see him with the rest of the family! My little cutie! Now get busy and send in those names... 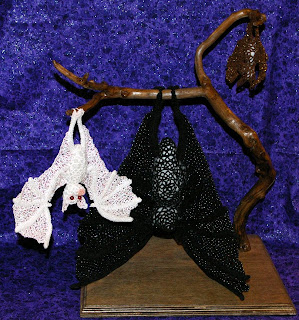 All righty! I decided to make the little brown baby bat brother. He got himself inside my brain, and would not let me go! So, he has begun to be began...
So far, I am loving the little guy! I thought making Dolce` small was difficult.. but little brother is so very tiny! He is milk chocolate brown, about 3¾" tall.. so far.  He has a way to go before he is finished, but I have decided to let the contest to name him begin! So, get out those thinking caps, and send me names for my little boy bat.  Comment on this post with the name you have selected.
One name per person, please, so think hard.  I will announce the winner on February 15.. which is my birthday, so it will offically be 'baby bat's' birthday, too.
So, you have a whole month to think about it.  So what is to be the prize? Hmmm... I will give the winner a choice. The winner can either have my Halloween Pattern collection, My Christmas pattern collection, or something tatted by me especially for them. How's that sound?
LET THE GAMES BEGIN!
12 comments:

Dolcè and Bella hangin' out 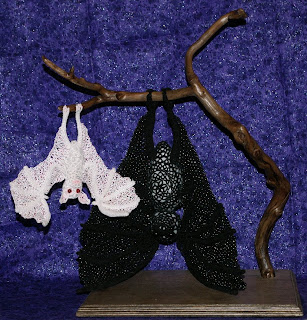 Here is a picture of the girls 'hangin' out'.  I started to make Dolcè her own perch, but then had this thought that she would look cool hanging out on some birchwood. Well, I don't happen to have a birch tree. So, until I can figure out where to get a little birch branch for her, she is hanging out with her Mom.
This is where she will be permanently after the Fair, but I really want a birch branch for her Fair perch. I guess I will have to peruse the park and neighborhoods to try to find one.
Hmmmm I just noticed there is another little branch here that is empty.....perhaps a little brother is in Dolcè's future?
Ok, I am editing this to say, I will probably make the little brother. He would be chocolate brown, and, as I have not had one yet, I would have a naming contest. BUT, don't start suggesting yet! It will begin AFTER he is finished, whenever that may be. But, you can choose whether it will be a random winner, or the person who first suggests the name I like the best. (which may be the name I have already thought of).
Ok, you can leave a comment on which option you would prefer if you entered.
7 comments: 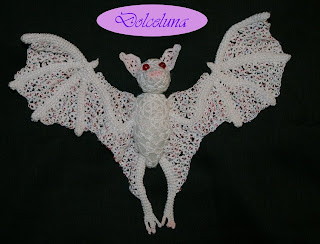 Here she is! Newborn albino baby of Bellaluna! Her official birthday is January 1, 2011...the day she was actually finished born.
I had quite a time trying to come up with her name. But, she is so sweet, I chose Dolcè (pronounced dole-che'), which is Italian for sweet. Luna, of course, meaning moon, and also after her mother.
She is 6" tall from top of her little ears to the tips of her little toes. She has a 9" wingspan. And the bead count in her wings? Approximately 490 give or take a few. I used clear and pink seed beads in her wings.  I haven't finished her perch yet, as she has to have her own to go into the fair this year. After the fair, she will hang with her mother on a little off shoot branch of her mother's perch. But, if everything goes right, she will have her 'coming out' party at the Lace Day in Lafayette this year. They have their lace day every other year, so Dolcè and Bella both will attend....if I can.
So... what do you think of my new baby?
18 comments: