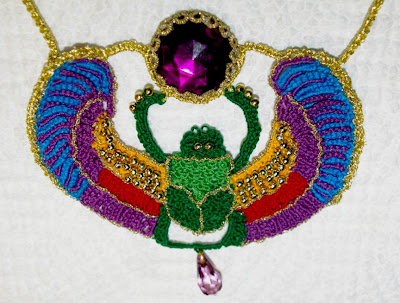 I just finished my newest project :The Egyptian Scarab Necklace. I have had a photo of a statue like this for a very long time, and, thought just a couple of days ago, 'that would make a neat necklace'. So, that is what I made. Like it? I really like it. It is done in DMC 8 and some Metallic threads I had to separate. I also added a few beads for effect. My sister, before it was even finished, told me she wanted to borrow it! Well, first, it goes in the fair. I still have to block it a little, but I am very pleased with the way it came out. How 'bout you?
P.S. Thanks, Gina for the info on how to do the chain! 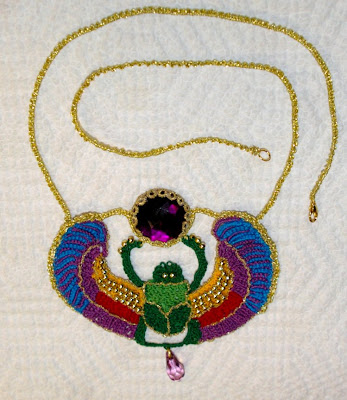 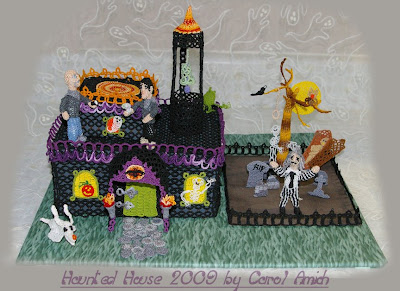 ok, here is what you have been waiting for! (well some of you) my Tatted Haunted House! Yippee!! It took me about 4½ months, on and off, to make it. It is going in the local fair, in July, so as of today, it is finished. If I have any time later, after making other things for the fair, and myself, I may add some other things to it. So, here is the tour...hang on! Above is the front of the house. Below is the back of the house. There is a gargoyle, frog, spider in the window, two skull posts holding the chains to the large back drawbridge door. Inside the door...Witchy Prue is stirring her cauldron of potion. 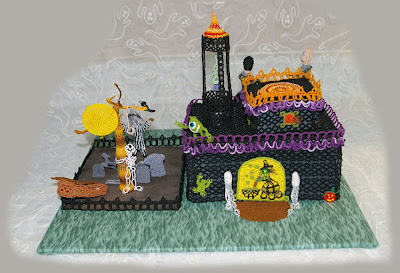 This is the graveyard.. with none other than Beetlejuice (Betelgeuse) standing guard. There are several tombstones and such, a gnarled tree with a crow, and an owl. Also, there is a coffin with a little Mummy, and a tree hugging Skeleton. 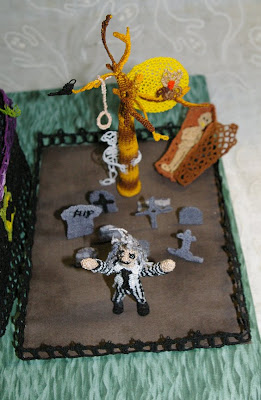 On the roof, Jason and Grant, the Ghosthunters, seem to have found a little ghost in the window with their ghost hunting equipment. The bell tower stands to ring in midnight... the haunting hour. 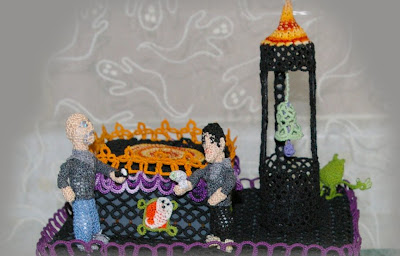 The front of the house, sports a nice little entry way, a skeleton waving out the window, a Jack O'Lantern in the other window, and torches to light the way. Zero, the ghost dog from The Nightmare before Christmas, guards the front door. He is on a little wire, so he hovers and wiggles if you touch him. 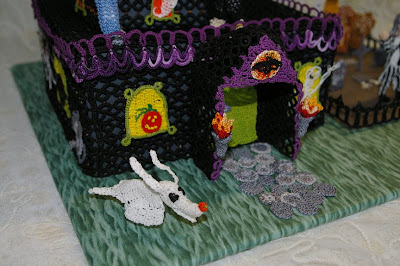 Also on the roof, we have visiting from Monsters Inc. little Mike Wazowski. 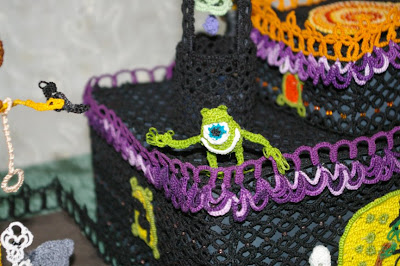 The side of the house has a cat in the window, spider in her web, and Mr. Gargoyle sitting around. 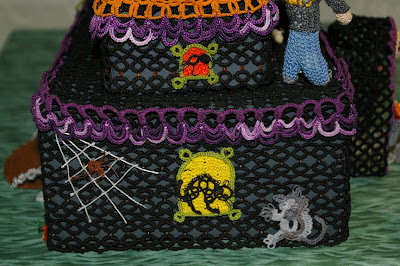 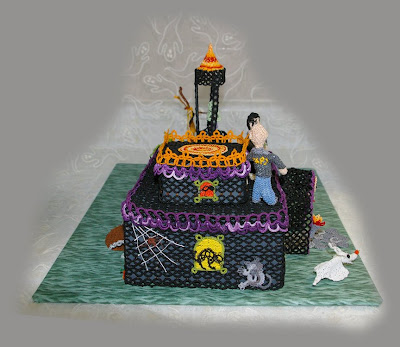 This is the end of the tour, hope you have enjoyed yourself. If you are around Frankfort in July.. stop by the fair to take a closeup and personal look.
30 comments: 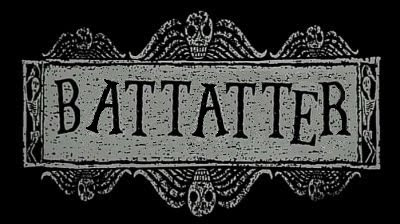 My Haunted house is nearly complete. I have added a bunch of new elements.. and before I have the "reveal" I thought I would tease you with some hints.
Here is hint number one. Can you guess what or who might be lurking in my graveyard?
4 comments: 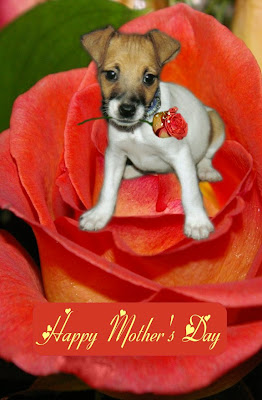