Ok, I don't normally do this, but I have gotta vent. It seems lately that everything I own has decided to break on me! My washer was first, my fridge has been acting up, my tv went out, and it has been in the 'shop' for a month and a half, my lawn mower decided to die right in the middle of mowing, the bathtub drain has clogged, and now, the sink in the bathroom has a huge hole in the "j" bend pipe underneath! WHAT THE??? Oh, they say when it rains, it pours, but they didn't say it was a flood! I did not need this stuff to happen, along with the other 1000 things I need to do to this house. ugh..
Needless to say, I did not feel like tatting today, so, no pictures to show of anything. Ok, I am done whining. I just wanted the universe to know I am not happy. Think I will go to bed, and hope nothing more happens tomorrow!
3 comments: 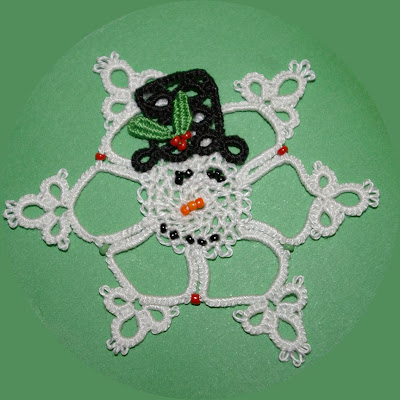 Hi Everyone. I just sent out this little guy last week to my Blizzard in July (from the Tattinggoddess group) exchange partner. His name is Flakey (my own design). I hope she likes him. I won't tell who gets him, until she tells me she has him. Anyway, it was a sort of Christmas in July exchange, just a card and a snowflake, which was great for me, at least, 'cos it was quick and easy. I do love the bigger exchanges too, don't get me wrong, but sometimes a quick little motif exchange is a lot of fun! We should do more of those. It also had me thinking about my recent round robin exchange. I say recent, but it was started over a year ago. A very LONG story short, I, and others, did not receive any of our hearts back, nor the ones others made for us. This had soured me greatly on doing round robins. I was quite upset at the outcome for myself and the other non receivers. Then, I got a card in the mail from Sharon Briggs, the co-ordinator of the exchange. I was flabbergasted to say the least when I openned the card and found this inside... 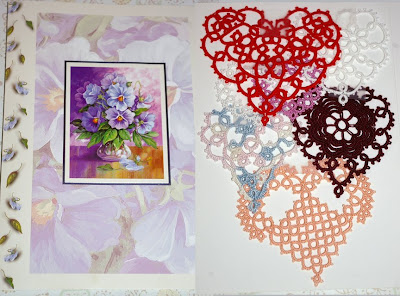 six beautiful hearts!!! She had tatted these herself and sent them to me. It was a total surprise and I still cannot believe the generosity of the act. I must say a special THANK YOU to Sharon, as you have rekindled the notion in me that tatters are the most special people! Now, I believe I may rethink joining a round robin in the future, which is special to me as I do so love exchanges.
9 comments: 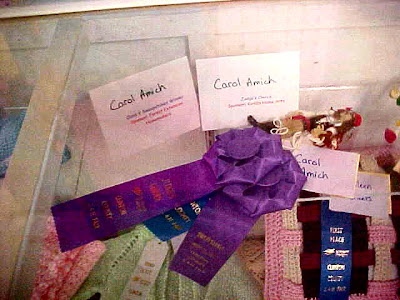 Captain Jack Sparrow, entered in Tatting, won three ribbons! Sweepstakes, Judges choice and 1st!!! Oh my! I was so surprised at this! I guess the Captain will be bringing home some nice little pirate swag!! 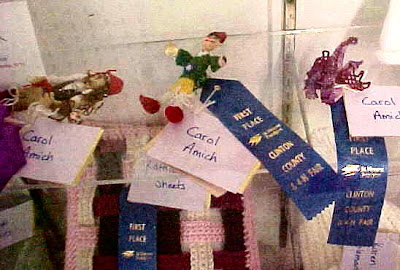 Next to Captain Sparrow, was none other than my little leprechaun, Conor! He won 1st place. He was so honored, now he has a beautiful ribbon to wear on special occasions!
Then, we have my little baby dragon, "pd". Conor was glad his bestest little friend won 1st place, too. 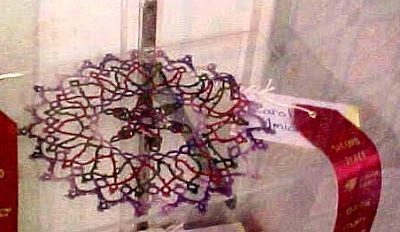 My doily, which I called Charmed Destiny, done in the Celtic syle, won 2nd. It was a last minute choice, as I didn't finish Iris's doily. Good choice, I guess!
My scarab necklace, shown here in a very bad picture, won 1st in Jewelry. 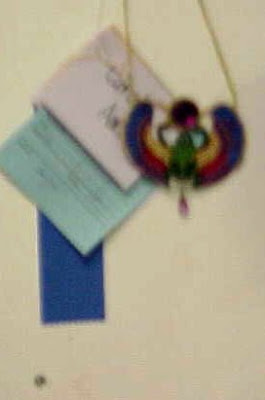 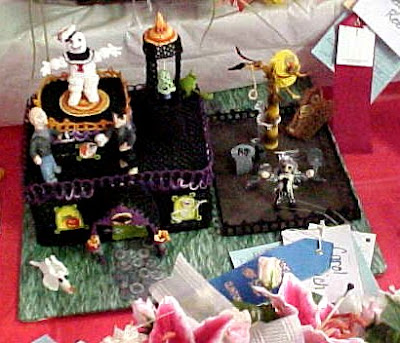 The "Rebel tatting on a tatting shuttle" ornament won 1st in Christmas ornaments. 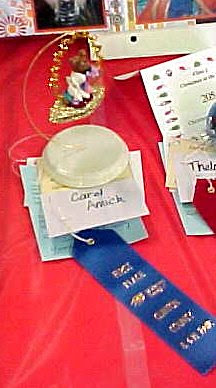 And the last 1st prize I won (that makes 7 if you are counting) went to my tatted gloves! They are done in black and have a bunch of black/white beads on the cuffs. The little beads almost look like eyes! 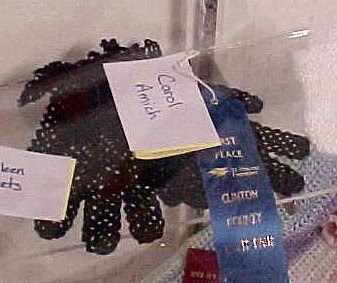 Ok, now for third. I won third prize on this photo of an orb spider. 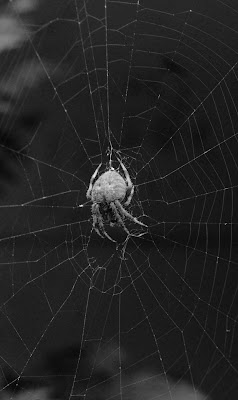 I am always surprised when I win in photography, mainly because there are some 'semi' if not real professionals in there, and people who take pictures in foreign places. Well, I cannot travel, so, I can't get exciting locale photos, but, I guess my little spider was exciting enough this year!
Last ribbon, third place,but not least, is my Americana paver. I painted this paver for my friends Bette and Dave for their anniversary. They haven't seen it yet, and when they go to the fair, they should get the clue that it is theirs! I have painted baskets of flowers on pavers before, but I got the flag idea because Bette and Dave like Americana. Sooooo, I painted the basket to look like a flag basket! I like it so much, I am going to make myself one. 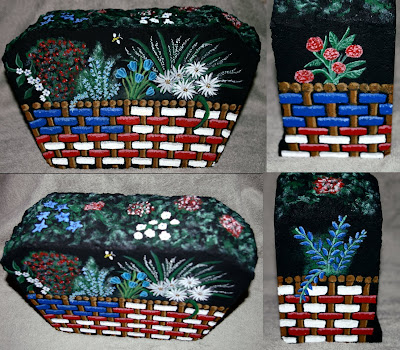 Here are some other photos of my non-winning entries. In this photo, we were supposed to make a flower arrangement that would be suitable for someone in the hospital. I REALLY loved mine. Can you guess which one it is? 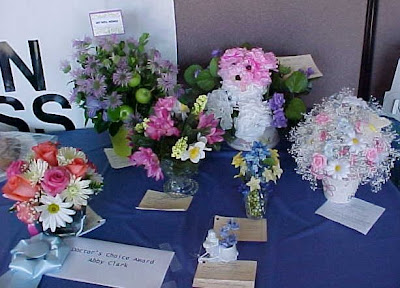 Well, it is the puppy one. If I was sick, I think it would really cheer me up.. but... it didn't win. I also entered this yellow one in crafts.

My hedgehog, which you have seen before, these photos, and these tatted get well cards, also didn't win. 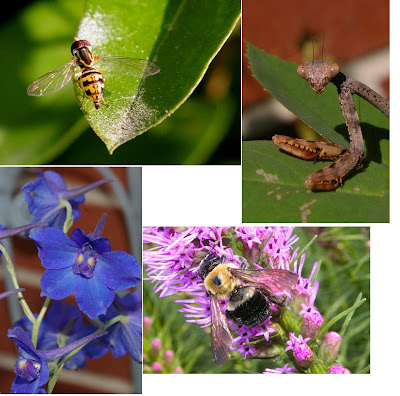 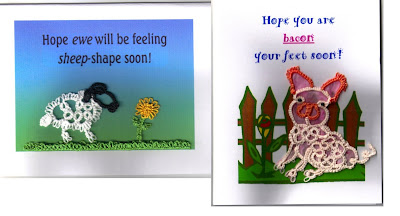 All in all, I am pretty pleased. Any comments are welcome.
22 comments:

Ok, everyone, wish me luck! I just entered 20 (!) things in my county fair! I had the papers pre-filled out, and it still took me 45 min. to enter everything.
Tatting-wise I entered the haunted house, a doily I designed, Capt. Jack, Conor, Baby dragon, gloves, scarab necklace, and two cards with tatting on them. I also entered some photos, my hedgehog made from a gourd, 2 flower arrangements, and the ornament I made that is a shuttle with a little Rebel on top, tatting. Too bad I couldn't look at the entries already there. They used to let you, but, for some reason, stopped. Hmph! Anyway, I did happen to see an awesome looking Halloween quilt that I will take a photo of Sunday. That is when the building opens up and I can go see all the stuff. Oh, I can hardly wait!
9 comments: 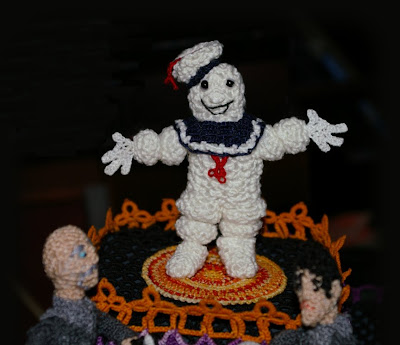 Presenting... GOZER from Ghostbusters... better known as the Stay Puft Marshmallow man. I wanted to do a ghost from Ghostbusters, but didn't think I could do the green Slimer ghost justice. So, I did the ever popular Stay Puft. He is on the top, trying to terrorize Jason and Grant, the Ghosthunters.!
8 comments: