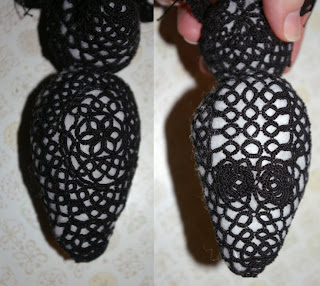 May 15.. here is the progress on my Bellaluna.. I have her body finished now. I have to make her legs and 'arms' and then her wings..  I think I will put beads in her wings to make them more special. The left is the front and the right is the back.  I wanted those two little circles on the back to look like her bum..heehee..

Also, for you who are following along.. here is week 19's ornament. A Celtic Cross.
4 comments:

Do you have the mate to this earring, (as seen on the right) or a pair? I lost the mate to this, one of my favorite pairs of earrings, a few years ago. I have decided to put up the picture hoping someone out there has a mate or a pair, they are willing to sell me. I am going to leave it up on my page..indefinately.. or until I find one.

I also have this medallion I got in a box at a yard sale. Does anyone know anything about it? There is what looks to be Latin writing on it, it may be a religious medallion, as it does say Alpha and Omega on it, but I don't know. If you know anything about it, please email me or write a comment about it.
Thanks for looking!
11 comments:

Ok, so, here is what I have decided to tat next. It is something I have wanted to do for a while, but just recently could invision it. He is going to be... 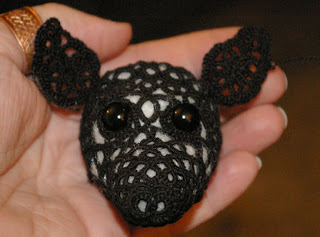 Tada! A 3D tatted fruit bat! Fruit bats are really cute, because they actually look a lot like a dog with wings. Here you see his head, the only part I have finished so far. He is going to a full bodied, and winged, bat. The plan is to get a neat gnarly branch from my dying tree, make a sort of stand out of it, and hang my little bat from it, upside down, of course. I wish they made black polyfill.. I think that would be neat to stuff him with, but at least, you can really see the tatting this way. What do you think?
15 comments:

Here is the ornament for this week.. Snow Bear! He is one of the snowflake animals I have thought up. He is a variation of the Snow Angel, of course, only a bear! His little tail makes the 6th point of the star. 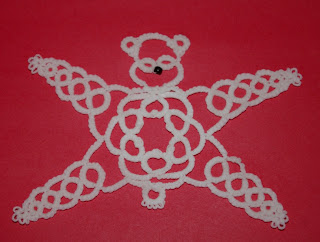 I received and email today from someone wanting to see my Gingerbread house. And, upon looking, saw that there were no pictures of it posted here!  I guess they were all posted on my old Myspace site, which I never go to anymore. It took me about 5 months to complete, if I remember correctly. Most of the time was spent trying to figure out what to put on it!
So, here are some pictures for anyone interested. This post has a lot of pictures so, hold on, here we go...
First pictures up.. the candy. I tatted every bit of candy on the house. I had someone, who saw it in person, think the chocolate kisses were real.. that was a big compliment! 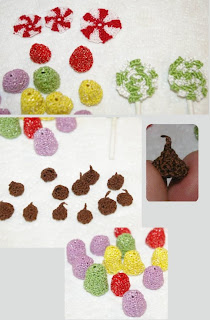 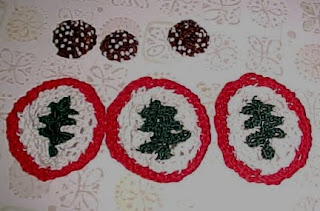 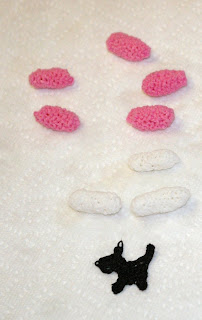 Good and plentys and 'licorice' scotty dogs. I have a red one on the house, too. 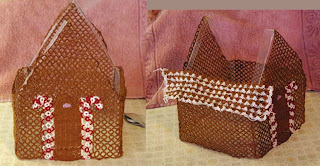 ...and more. House on plastic shape I made, later made a cardboard one. 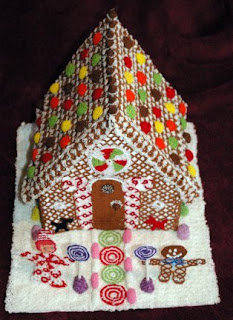 The house complete with tatted snow on the base. (I think that took the longest and was the most tedious.) 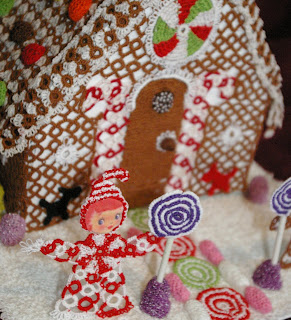 Closeup of Peppermint girl and you can see the red scotty in the background. 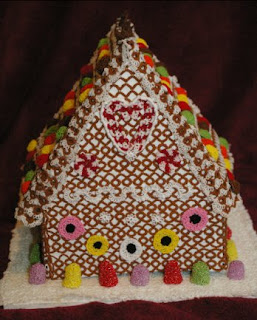 The back with licorice all sorts, candy canes making a heart, and gumdrops. 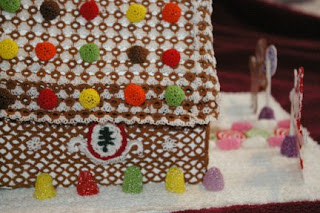 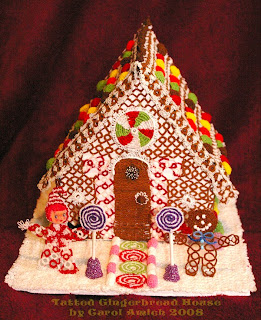 The official picture of the Gingerbread house.
To see pictures of the Haunted house, go to the sidebar, to 2009 April and May.
Thanks for visiting!
7 comments: