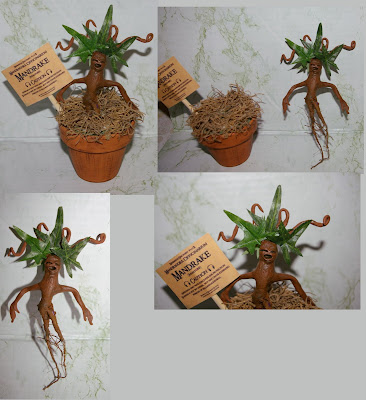 I have always wanted to make myself a baby mandrake, like the ones in Harry Potter, so here is my first! He is made from a real (sweet annie) root, and sculpey clay. I really like him. He is only about 5" tall. I have another root (holly) that I am going to make another one from. It is much larger, so I am going to have to figure out what to sculpt the face from, as sculpey would be too pricey for that large of a project. Anyway, hope you enjoy him, and wear your earmuffs!!
5 comments: 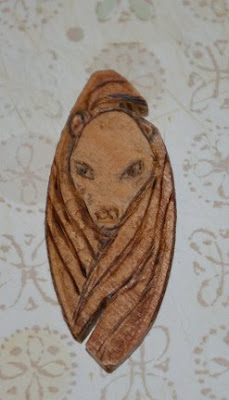 Here is the other bat shuttle I was trying. I made it out of a biscuit. (It is a piece of wood, for those who don't know, not really a biscuit you eat.) I was trying out the wood burner, and I had these 2" biscuits, so...
I wonder if they have larger biscuits, as he is pretty small. A 3 or even 4"(could be sanded down smaller) would be nicer to try to burn. I put some rosewood stain on him, too.
1 comment:

I had a picture of a black fruit bat hanging from a tree, and thought it sort of formed a shuttle shape, so, here he is. His wings are sort of wrapped around him and the thread attaches to the wings underneath. He is made from some air dry clay I got at Michael's and though it is very light like foam when dry, it is pretty sturdy. I could actually sand it. I made another little shuttle, which isn't quite finished yet. It is very small, only about 2", and wood burned, but cute. I will show that soon.
Have I mentioned I am in the Harry Potter Crafts group? Well, I started making a wand last week, and need to add something to it before showing it, but, it will be worth the wait. I also entered a crafty contest, and I made these little Pygmy puffs. 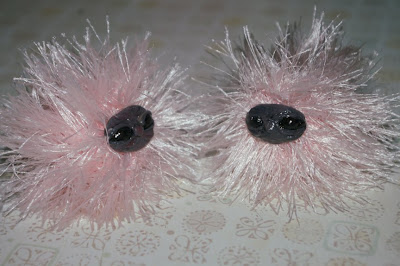 They are little creatures from Harry Potter and The Half Blood Prince, and they are sort of like tribbles, for all you Star Trek fans out there, except they have faces. I haven't named mine yet, but I think they are CUTE!
9 comments:

Wow, who knew these would go over so well!? I have had many people email me about them, and they are almost gone. I am waiting for a couple of people to email me back about their choices. When they do, I will post what is left here.
Thanks everyone!
1 comment: 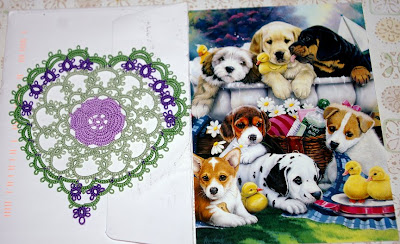 Hi there!
Remember the round robin, and how I didn't initially receive anything, and then received hearts from Sharon? Well, I received this lovely heart from JB Locke, one of my RR partners in the mail! She ever so kindly wrote me and asked me the colors I prefered, and then re-tatted the heart she had originally made for me! Wasn't that sweet? And, I guess she knows me well, she put it in a notecard with puppies on it. Awwww! One of them is even a Jack Russell, like Rebel. Thank you so much JB, I love it.
3 comments:

JB wanted to see the Hairpin lace maker. Here you go. I don't know how to use it yet, but I have seen a bunch of patterns that use it.
7 comments:

Oh my oh my! After yesterday's whine fest, I am feeling very guilty to tell you what I got in the mail today! First of all, the Blizzard in July Exchange on the Tattinggoddess site was supposed to be just a tatted snowflake in a card, wasn't it? Quick and easy. WELL... take a look at what I received from Irma Luna in Santiago, Chile. 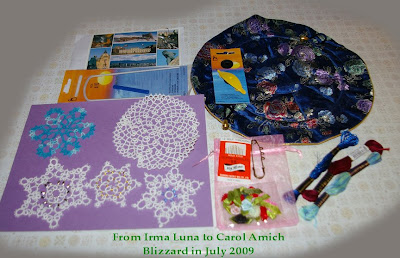 Wow! I was so shocked to see this package. There was a lovely note from Irma, and a postcard from Chile. A hairpin lace maker, pony shuttle (oh, bobbin shuttle, my favorite!) A beautiful drawstring bag with the three lovely threads you see in it, needles, roses, a large pin to add 'something' to, and finally the snowflakes! Five lovely snowflakes. There are beads on some as you can see, and all different. Everything was so great to receive.. thank you sooo much Irma!
here is a little closer view of everything... 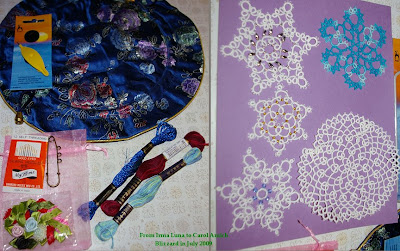