Look what the mailma'am brought!

As you may recall, I tatted a Grandfather Clock for Diane C..aka LaceLovinLibrarian. I just wanted to give her something I tatted, as I knew she would appreciate it. Well, today in the mail, she sent me a thank you gift. WHAT?? I really was not expecting anything in return! And what did she send me, you ask?. Looky! 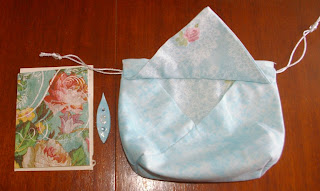 I had admired (and tried to win) one of these Origami project bags at the recent Lace day. I did not win one, but Diane did.  She sent me this awesome bag,  a lovely card, and a shuttle she blinged out especially for me!
The bag is so clever, with little pockets on the outside, and look closer at the lining fabric.. 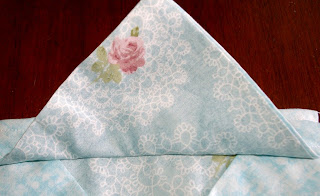 ...the fabric has tatted doilies printed on it! Isn't that awesome! I love this fabric!
And now for the shuttle..so cool...

I couldn't get a great picture to show how very cool this is, but it is totally glittery, with pretty blue stones and a glittery big "C" on it for my name! I love it!
Thanks so much Diane! I will treasure them!
And, as a side note, I am making nice progress on my 3D project. I had to redo a window, oh, is that a hint?, but everything is on track again. Looking good!
4 comments:

I believe I have decided on my newest tatted project, or, should I say daunting task? Haha.
I had thought about this project a while back, and during the recent Lace Day it was mentioned, among other suggestions, and got me to thinking of it again.  I had a very slow night last night, and sat down with pen and paper... and the more I sketched, the more excited I became about it. So, I shall start today.  Am I going to say what it is? Nope. You will have to come back and see! (or better yet, make guesses)
I will take photos, of course, throughout the process. I have most of the components straight in my mind... it is only the platform, (or floor, or ground if you will) that hasn't come to me yet. As each of my dioramas are on a 'floor' of some kind, so that they may be transported easily and it also adds to the diorama itself.
I haven't done one is quite a while, but, as this one has firmly taken hold in my brain, I guess it is time to make it.  Wish me luck on my new adventure!
3 comments:

Well, folks, the two long years have passed, and I have gotten to attend another Lafayette Lacer's
Lace Day! I so look forward to this, I wish they would have them every year!
I arrived and signed in and was immediately greeted by my old pal Mary Harris. She spent part of the day knitting some adorable little baby hats that look like cupcakes! So cute. And isn't her shirt cool! It is covered in tatted motifs! 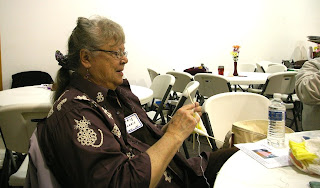 We also shared the table with Steve Bowman, who was working on a netted hanky, and his student. 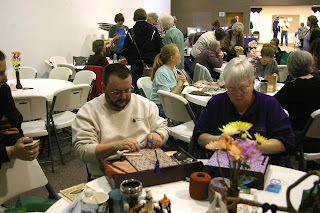 I shopped, I talked, I had a great time. I took my 3D tatted bat family and my Haunted House for show and tell. Oh, also a 2D Dalek I had just created the night before. All were perused and oohed and ahhed over. I was waiting on the arrival of my friends, Diane (LaceLovinLibrarian), and Denise. They were coming from Illinois!  They arrived and I was very glad to see them again. I presented Diane with this little Grandfather Clock I had made for her. In a previous post, I had asked what sort of thing other tatters would want to see in tatting, hoping she would answer, as she has gifted me some great things in the past. She was very surprised, and pleased, when I told her she got to keep this clock! 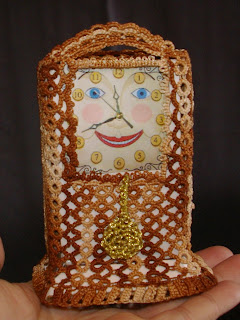 More shopping, talking, and laughing insued. I did miss my friend, Laura. I don't know why she didn't show up, but just know, Laura, you were missed!!
I won one of the raffles, a pretty box, and Mary won 5! Wow! She gave me a candle from one of the raffles she won! Denise won a great package of threads, and the center piece from our table, and Diane won a lovely origami bag full of tatting stuff. I LOVED the fabric it was made of. It had printed tatted doilies on it! She told me the fabric came from a local retailer, so, I went there right after the get together, and they had it! Um, yes, I may have bought two yards...:-) 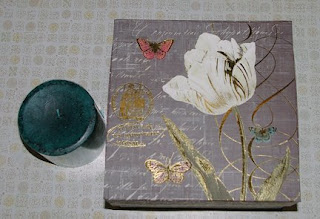 Here are some photos of folks who attended. Sorry I don't know all the names, but some are listed. If you are here .. tell me your name! If you don't want your picture here, tell me that, too, and I will remove it. 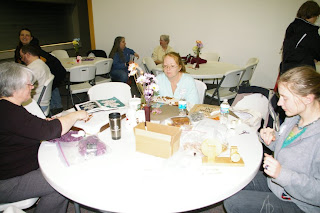 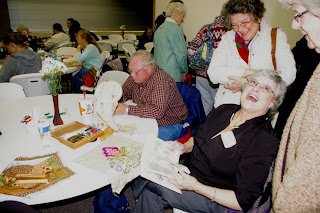 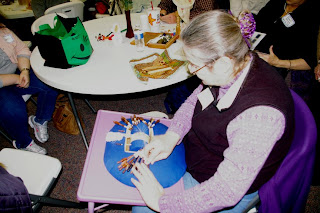 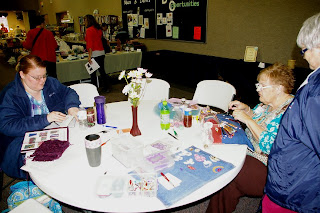 and a somewhat panoramic view
I don't know how I missed getting a picture of Diane and Denise!  My bad!! Guess I was having too much fun! Sorry, girls!
And here are some examples of the crafting going on. Again, somehow I missed taking a picture of the BEAUTIFUL flowers that were entered in the flower contest. 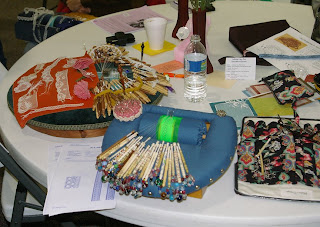 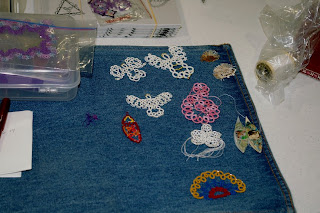 Here are the things I bought. Not a lot, if you look at what others bought (wow) but things I wanted and will use very soon! 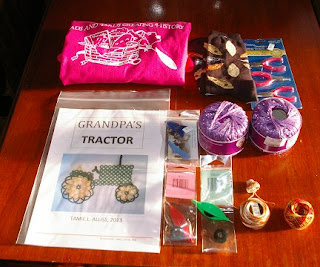 The tractor is a new pattern by Tamie Allis. I believe it is her first, and she was so proud of it, as well she should be!
I got a couple of new shuttles, threads, puppy snips (so cute), new socks with tatting shuttles on them, and a new t-shirt!
As we started to leave, I had mentioned earlier that I had lots of troubles with one of my handmade shuttles. Denise went to the car and gave me this. She said it would make it much easier to use. She also gave me these buttons. 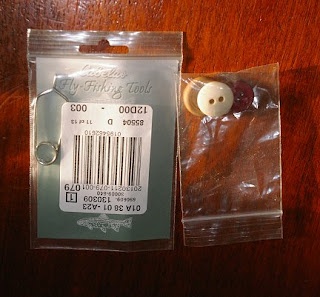 So sweet. Thanks again Denise!

I must say, I had a great time, and can't wait until the next Lace Day!!
2 comments: