Here is a preview of what I received in the Fantasy Creature swap..
go to my other blog Dog-gone knit to see all the goodies! 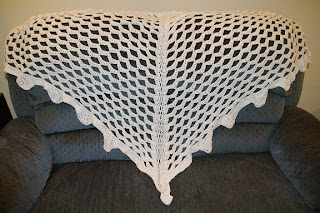 Here is a little video I made of the fun I had at Lafayette Lacer's Lace Day yesterday. It is about 3minutes.  I will add more details later... until then..Enjoy!

Ok, as promised, more about Lace Day!
When I arrived,  it was gloomy and raining.  But I walked in the doors, and was met by two very bright smiles.. LaceLovinLibrarian and her friend LaceRN! They came from Illinois for the day and had brought things for the raffles... and gifts! LLLibrarian let me choose a shuttle from her pile of blinged out shuttles. It was a difficult choice but I finally settled on this one. Pretty,  glittery one with Lilies of the valley. Thank you, Diane! 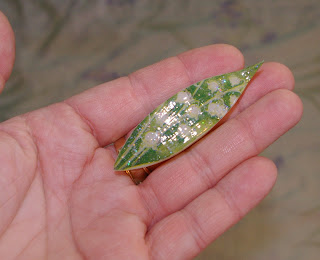 I had taken my tatted bat family and my Haunted house...and was immediately deluged with compliments!  Such a proud momma am I!
I went to put them on the show and tell table. Well! wow! There were so many beautiful things there already! Excellent!
A little later on...who sneaks up behind me?
Laura Bobay from Columbia City! We meet here everytime to spend this great day together. She brought me this super cool Maranka gourd! hmmm what will I make this into? 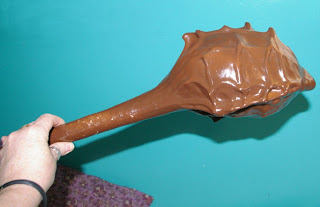 I saw old friends, like Tatting Goddess, and Mary Harris, and made some new ones, like Connie, Kelly and Mindy. You can see them in the video, well, except for Tatting Goddess. I don't know how I missed getting her photo, but I did get photos of her tatting! The rocks were a hoot!
Then, there were the raffles! Oh, I love the raffles! I bought $20 (30tickets) worth
of tickets. And, silly me, forgot to use 10 of them!
But.. I won!
Here is the first (yes, I said first, as I had a really lucky day), one I won. 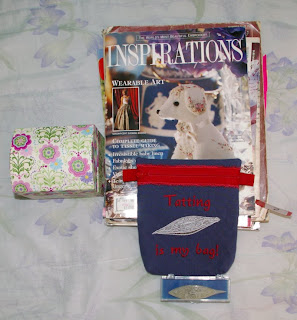 I really really wanted to win this one for several reasons. One, it had a shuttle bling box from LacelovinLibrarian, it also had this awesome embroidered tatting bag, and a Peter Cua etched shuttle! The wow factor of this one was incredible.  When they called my name.. I was ecstatic!

This first raffle prize was more than enough for the price of the tickets! But wait, there was more.
Then I won the stack of magazines in the first picture. With this lovely dog pattern in one of them. I will have to make one of these.
Then there was shopping, chatting, laughing, lunch (yummy strombolli at the Pizza Hut), more shopping and fun.. then, more raffles. 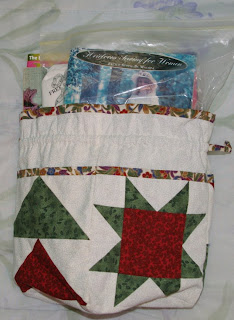 I won this. Beautiful quilted bag full of magazines and patterns! Did I mention, I love magazines?
The last raffle was a different one. You were supposed to guess how many spools of thread were in the large tub, and write it on the ticket and put it in the raffle container.
They said two people were the closest.. they called a name.. no one came to claim it. As it was pretty much the end of the day, many people had gone home.  So, the next closest person got it.. me! 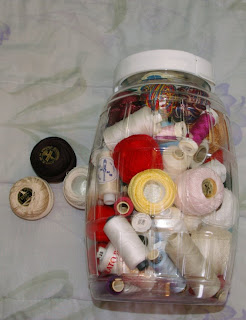 Wow, am I lucky or what? Really, not usually, in any other circumstance, but today was my lucky day!
There are all types of great threads in there... Carolyn Regnier told me I had to make something great with them.. I will!

Here is a panorama I made of the rec room as I call it. It is where the refreshments and raffles were held.  By the way, I still want the lemon cookie recipe.. I am craving them NOW!
Can you name these people.. I am sure you can some of them, at least. Sorry, though. The lady on the right sort of got 'ghosted' when the panorama program got finished!
I had such a great day...
Happy Anniversary Lafayette Lacers!!
Here's to another 30... and more
6 comments:

Here is the second type of web. It fits around the neck better but seems a little small.
Still, I like it too. I will be wearing one of them to the Lace Day this Saturday!!! yeah!!
Also bringing show and tell!
And Gina, I thought about painting the clay, but I wanted it to look smoother than the paint makes it look.
I have pretty much every color clay.. except yellow! What was I thinking? 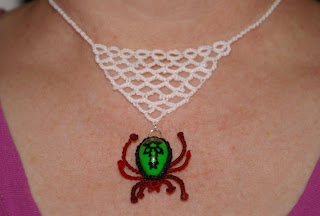 Ok...here it is finished. It is a Marbled Orb spider necklace. 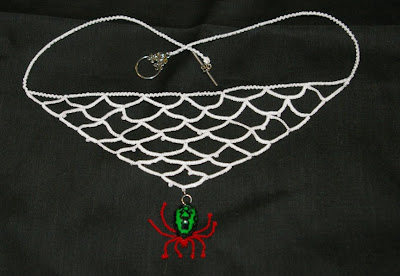 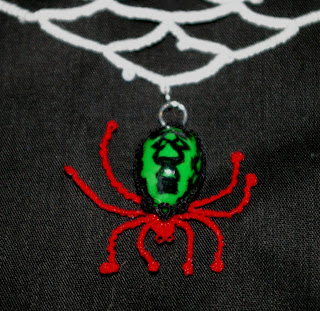 The back story.. last year I found THE  most beautiful spider I had ever seen in my yard. I found out
it was a Marbled Orb Weaver.  I had this idea of making this body look like hers, enclose it in tatting, tat the head and legs, and make a web necklace for her to hang from.
Well, Marbled Orb weavers are yellow, and I didn't have any yellow clay, so I just made
her from green. ( I never wear yellow anyway).
Here is a picture of the real one...
Mine is no way as beautiful as the real thing, but I like it anyway. Next time I am in Lafayette, I am
going to get some yellow clay! I may even add some black to the legs of mine. I like the web necklace, but it hangs funny, so I have to stiffen it. More pictures to come. 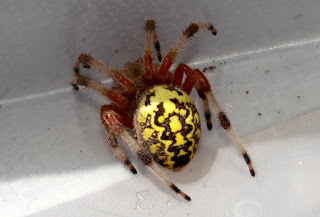 The new idea I had on Tatting day is coming along GREAT!  I make 4 of the 'basic' things, and today, I will work on the 'other' part. Should have a picture soon!
1 comment:

Yes, it is here again!  And, funny, I woke up with an idea for a really cool (if I can make it happen) necklace idea! I have it sketched out.. and will try making parts of it today! If you know me, you can probably guess it has something to do with Halloween. But, hey, no bats this time.. UNBELIEVABLE!
Have a great Tat day, eat chocolate and make something lovely!

Oh, I just had another idea... though I cannot make it. How about a shuttle, that has a plastic 'cover' on one side that can be removed (like snapped on and off) , and you place a little piece of your own tatting on the shuttle, then snap the cover back over the shuttle. Essentially encasing your tatting with the cover, but making the top smooth so tatting is still easy?  Come on someone, make me one. haha!
3 comments: