Well, it has been a while since I have posted. But, I have not been idle!
I have been swap crafting, so most things couldn't be shown.
I am in a Christmas Elf swap in the Ravelry Group Friends who Crochet and Craft together.
Some things still can't be shown but, my favorite thing I sent 'Mixedkreations'  was this oh so cute
Troll Elf!
His name is Elvin. I made him up as I went, as there were no troll doll patterns that looked like the old ones. I dyed his hair red and green.. roving with koolaid for the red and food coloring for the green. It is hard to see his facial features in the photo, but he does have a nose, brows, and lips. The beard is removable.... just for fun.
I didn't measure him, but he is about 7" I think, not counting the hair. I made her another thing, but you can't see it until later...as she can't open it yet. 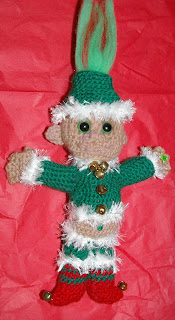 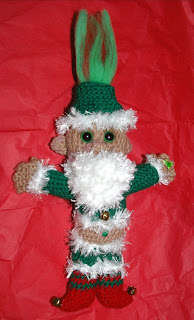 I also, made myself this super cute Olaf! Coincidentally, he is from a pattern by.. MixedKreations! Easy to follow and sooooo cute, He is 9" tall. 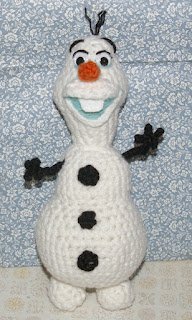 This little Rudolph is a pattern on Ravelry. I think he is so cute. I get myself a little reindeer of some sort every year, this one I made! 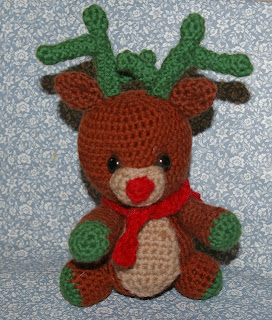 Tatting? Yes, I have done some.  But, for Christmas gifts so you can't see them until later.
Let's just say, they are some of my own patterns, ornaments, and you can guess the rest.

I also made this little Christmas duo... Jack Skellington as Santa and Zero as a Reindeer! They are quite small, so they can sit on a Christmas tree branch or in a small corner on a shelf.
I made them both up as I went. 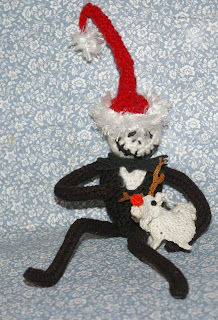 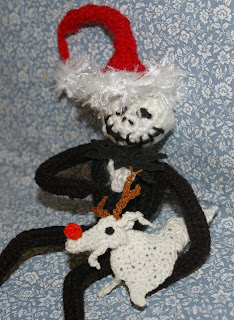 They will go to an unsuspecting recipient!