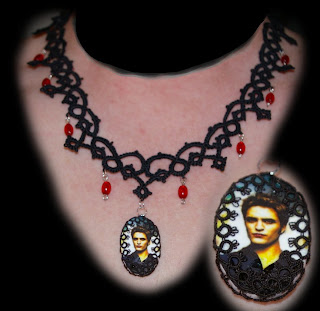 Hiya! I just finished this necklace that I wanted to put into the fair. The necklace pattern is not my own, I saw it on the internet (it is the design of agasunset, here is her blog, and she sells it on her etsy page.. minus the Edward cameo
http://agasunset.blogspot.com/2010/03/i-am-not-goth.html)
sorry I don't remember where) and when I put the red beads on it, I thought, this looks like something from Twilight (it is a movie about a girl and a vampire, in case you have been hiding under a rock).
Then, I thought it would look cool if I made a 'cameo' of Edward (vampire) and wrapped it in tatting and hung it as the focal point.  I used computer shrink plastic to make the image, then, I used black sewing thread for the tatting around the cameo. (I used DMC black sized 8 for the necklace.)  I think it looks pretty neat, so, it is going into the fair, too. One week to go!

Wow what a wonderful idea and it looks terrific. I reckon it will be a hit!!!!!

Thanks! I wish I could remember where I saw the original one, to give her credit.

Looks nice, and you did see this pattern on my blog here http://agasunset.blogspot.com/2010/03/i-am-not-goth.html
I even write how I came out with this pattern.
Cleaver idea to put Edward's picture as a pendant. I just hope you will not be selling this online as I already have it in my shop on Etsy, thanks.
Wishing you Happy Tatting :))
Angie

P.S.
I used it in many variations too:
http://agasunset.blogspot.com/2010/03/black-is-black.html

Yep, that is it! Oh, I would never sell it. I just made it for myself 'cos I thought it was so pretty, and I am on a VERY fixed income and couldn't buy it. I just edited my post to give you the credit for it. Also, thanks for the compliment on my bat!

Thank you for the mention :)) My son likes it with Eward, its sooo Twilight :))